K9 Officer James Brown of The Town of Madison had responded to the City of Middleton for a high risk apprehension track. The suspect had already been identified as a subject with felony warrants and a violent history with police. He had stolen a vehicle in the City of Madison and the vehicle was recovered at this location. Officers attempted contact at the apartment building but he ran out a back door and disappearing into a wooded area that separated the apartment complex from University Ave.

Brown’s K9 “Tonto” started a track which led into the wooded area to the south of the building then approached a business on University Ave. His dog Tonto initially turned left and continued to the east side of the building. His dog Tonto then showed the HALF MOON indication. He had been working on taking 3 steps back when his dog displayed that indication, just as our INBTI instructors had taught him. Officer Brown displayed the trust in the information the dog had provided like a seasoned officer. His dog then circled back and headed west. As they continued along to the west end of the building Tonto performed a down indication. He had found a winter hat the suspect had dropped! The dog team continued the track until Tonto's behavior changed and he began posturing aggressively. I looked up and saw the suspect lying in the snow behind a tree.” I gave the subject commands to roll onto his stomach with his hands behind his back. He immediately complied. Backup took him into custody.” 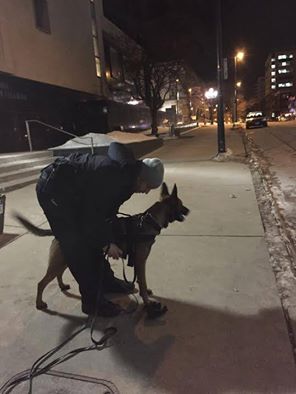