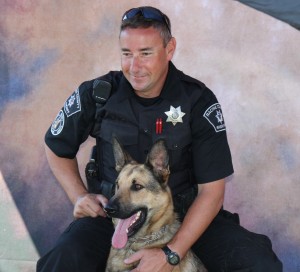 Officer Drewitz got a phone call from a deputy who said he was on a call that was 30 minutes old where a guy crashed his car in the ditch off the Interstate.  When a passer-by stopped to check his welfare, he took off running into a farm field.  Officer Drewitz got to the scene and the officers on scene didn't really check the area for the guy and never officially called for a K9.

"The deputy who called me knows I like to track so he called and said "but the guys car is locked."  I got there and now the track was about 45-60 minutes old and put a gauze pad in the drivers door jam and then after it sat for a while I put it on the ground in front of the car where he was seen running and did the pre-track ritual and ... picked it up right away.  He tracked to the farm field and through a tree line to a place called Apple Holler which is a seasonal type activity place for kids, like pumpin and apple picking type place.  Anyway he tracked up to an open door to the restaurant on the property where some employees were cooking.  I stopped him short of entering the building and we asked the employees if they saw the guy and they all said "no."  So I took the dog back to where I knew he was on the track and put the gauze on the ground and did the pre-track ritual again and he again pulled to the open door where they were cooking.  So I advised we chack all the outbuildings."

Anyway as the officers were checking the buildings the driver emerges from the apple orchard close to where the dog tracked to the open door. The driver was drunk carrying drugs but gave up with little resistance to the officers