On the 3rd June evening, Lorenzo and I took part in a quite delicate case, where the vanished protagonist was a twelwe year-old child, moved away from his house, with dramatic purposes, caused by a particoular emotional state. He lives in a group of houses on a mountain, in the heart of the forests of the Mocheni Valley. Lorenzo and his dog Reka were the first to arrive. Just after having collected the odorous objects, he quickly carried out a first search, during which the dog carried him in a thick forest, rich of thornbushes, and dangerous precipices. Here the dog marked sure, but it was very difficult to proceed for the orographic and vegetative characteristics. As Lorenzo Knew that I was arriving with Bagoo too, he preferred to stop himself and, without telling me anything, in order not to influence my job, he just took me to the starting point, the dwelling of the boy.

Bagoo traced slavishly the trace of Reka and in the critical point in the middle of briars and nettles,therefore Lorenzo and I decided to work both in that point. In few minutes, we realized that both the dogs, also if they were not finding the exact way of escape, showed signs that made to think that the boy was not very far from us. Contacted the coordinators of the search, Lorenzo and I invited them to take part with the surface-dogs, in order to clear the steep portion of the mountain where we were, but, unfortunately, they didn’t arrive in time because of some hitches. To be sure, Lorenzo with Reka, while we were waiting, verified, in a painstaking work , the other ways of escape around the dwelling and the dog, after finding old traces, was always returning to the freshest one. After putting Reka to take a rest, Lorenzo and I, speeding up the arrival of aids with surface-dogs again, restarted with Bagoo, which exactly did the same road of the first trace again. In the meantime, it was darkened, and maybe the glimmer of our front lights, or maybe the time passed to think and suddenly the boy appeared in front of Bagoo! He was a bit tired, but able enough to conclude the search , rewarding with the pâté my almost incredulous dog. We embraced him, heartened and while we were taking him back home, we also saw a smile, than obviously it has been transformed into tears of emotion at the moment of the embrace with his mother…

Good job therefore: we were successful to address the searches in the right direction and we contributed to find him.

Obviously before returning home, intensive trails for Reka and Bagoo, that were feeling the sparkling atmosphere of success, made their nails smoking on asphalt. — with Lorenzo Gardumi 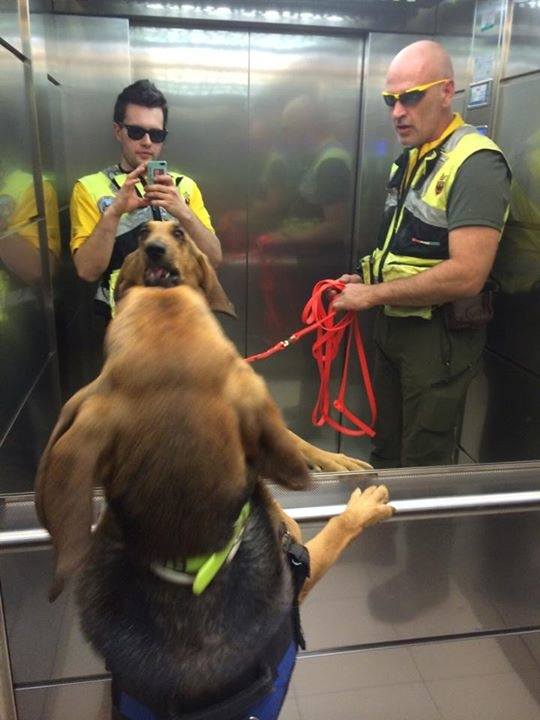