******** ATTENTION ******** ATTENTION ********
This past summer INBTI Instructor Mike Little and his dog Cody did an amazing job of providing information that led to the arrest of a bank robber. Although the suspect was wearing a mask completely covering his face, a bank employee thought she recognized the suspect as a past employee. While being interviewed by the local field office of the FBI in Wichita, Kansas, the suspect denied being at the bank in over 2 years. Mike told the supervisor his dog could either place him at the bank or rule him out. The suspect went to the bathroom during the interview and washed his hands. The agents collected the towel he used from the trash and Mike took it to the bank and scented his dog. Rather than give an NSI, the dog took trail to a location on a street and gave a car pick up indication. A witness then came forward and stated they had seen someone matching the description of the robber enter a car. Based on the dog’s trail, they were able to get a search warrant for the now suspects apartment where they found the money and other evidence! Since all of this has occurred, the criminal has confessed. Great job Mike!!!

I am sorry I am so late giving this announcement, but I was asked not to say anything at the time but since have been given the go ahead…

This is the 3rd bank robbery (that I know of) that an INBTI member or instructor has solved! Great job everyone! Let’s keep finding them and locking them up! 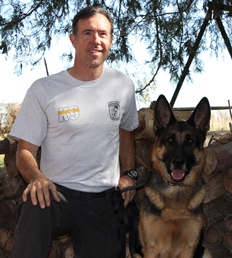