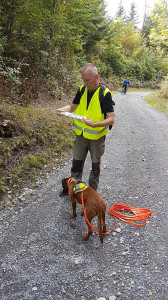 This email address is being protected from spambots. You need JavaScript enabled to view it.

• Apprenticeship and qualification as automotive-electrician

• 2016 – Present: Member of organization responsible for training Police Mantrailing-Dogs of in Nord-West-Switzerland

Since the 1990s I was able to build my foundation concerning the educations of dogs by working with my own dogs. Since then I have also been taking part in ongoing courses through the Swiss Kennel Club. In 2011 when the Police established Mantrailing teams not only for Mantrailers but also for their patrol dogs (dual purpose) my K9 and I were one of two teams in the K9 unit.  As a member of the team I was able to bring in my knowledge, deepen my experiences and help patrol dogs build their foundations in mantrailing.  Then from Oct 2013 until Dec 2015 I was responsible for the education of the Police dogs.

INBTI / TKM demonstrate with great ease and provide comprehensible steps to build up and maintain a successful Mantrailer. This method also guarantees the ability to maintain the capability of the dog. With TKM, I am often able to give the police officers from other Counties important and necessary inputs to help them build up and maintain their dogs so they can be more successful.