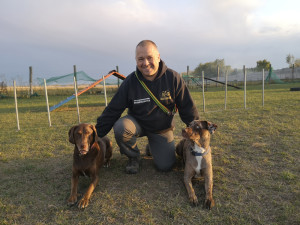 2014 first mantrailing tryout as a fun game for the dog

In December 2013 we decided  with my wife out of the sky that we need a dog … three days later our vizslador Duplo entered and turned our life completly over. We discovered hoe much fun is do train your dog for certain tasks. So when we had the chance to try mantrailing off course we took it. For a mixbreed from a labrador and a vizsla this activitiy was just perfect. After the first try runs we attended the first seminar, which was an INBTI one in Budapest we were lost ? (thank you Katrin Kolbe). During our training we met Gergo Janovszky, INBTI Instructor and he invited us to become members of their SAR Team Mantrailing Akademia Alapitvany. Here we had the chance to improove our training and work on real cases. By now with two dogs, our now 6 year old vizslador and a 2,5 year old louisiana catahoula.