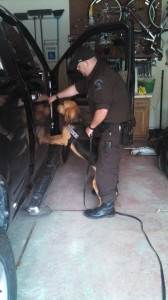 I started in law enforcement in July of 2001. In the fall of 2009 one of the deputies at my department acquired a Bloodhound that he planned on working. After a few weeks he decided that hounds were not for him. Knowing I had been working coon and bear dogs my entire life, he asked if I wanted her. I told him thanks but no, Bloodhounds were not suited for the animals I hunted. Shortly after, Sheriff John Wilson (an ex-Bloodhound handler himself) approached me and asked if I would reconsider taking the dog and working her for the department. After some thought I took on the project with the attitude of, "How hard could it be?" After a week my attitude had changed to, "What have I done?" There I was with a nine month old Bloodhound who had never known what it was like to be outside on a chain living in a dog house, and I had never known what it was like to have a hound slobbering all over my house. I needed help and quick, so I started looking on the internet for ways to start our training. After a few days of research, everything kept coming back to a man named Kevin Kocher and his book called "How to train a Police Bloodhound and scent discriminating patrol dog." The title couldn't be more simple (cops love simple). I ordered the book and the very first thing I noticed after receiving it was that there were lots of pictures. I quickly dove into the book to see what this man trailing thing was all about. I was pleasantly surprised to find out that it was a very easy read for me because a lot of TKM was the same stuff I had been doing my whole life with my other hounds. My new partner and I trained seven days a week with the patrol dog handler at the department. After few months of doing TKM, Remi (my Bloodhound) and I were sent to our first K-9 "Tracking" school. I was blown away on how well Remi did. My instructors were equally impressed. When asked what I was doing with her for training, I showed them my copy of Kevin's book. To my dismay they quickly dismissed it, saying dogs cannot scent discriminate. I argued that the results spoke for themselves. That turned into an argument about how patrol dogs cannot scent discriminate, at which point I brought out my department's patrol dog. Rocky was a seven year old German Shepherd that started TKM the same time I started Remi. The instructors quickly changed their tune after watching Rocky work. After that I finally talked my department into sending me to one of Kevin's seminars, so I could finally meet the man himself. I figured I would blow his mind with how well I had trained my Bloodhound. Kevin quickly blew mine by saying we would only be doing urban trailing at this seminar. I remember feeling a strong sense of panic because we were from the north woods of Michigan. Urban did not enter my mind at all. Kevin saw my fear and told me, "Luke, if you can trail across hard surface you can trail across anything". In the three days that followed, Kevin had us doing things that I never dreamed were possible with a dog. A year later Kevin brought me into the INBTI family as an assistant instructor. Shortly after, I became a full instructor with both INBTI and other organizations using TKM. The whole experience has been eye opening to say the least. Through all the years of working with hounds, I never got to SEE how the dogs worked. We ran trails by listening to the hounds and trying to stay ahead of them. Now I'm on the end of a 20 foot lead watching my dog tell me a story of where my trail is going. I'm truly blessed to be able to do what I do. I can honestly say I owe it all to Kevin Kocher and the opportunities through TKM.