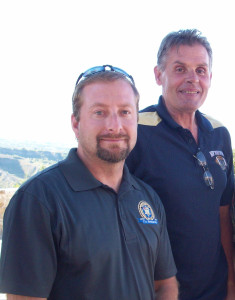 Chad has been a South Dakota Law Enforcement Officer for 23 years. Currently, Chad is a Supervisory Special Agent with the South Dakota Division of Criminal Investigation, Technical Service Unit. Prior to that Chad served in the United States Marine Corps.

In 1999, Chad joined the Codington County Search and Rescue where he began his volunteer service as rescue diver. In 2002 Chad then implemented a K-9 Unit and had gotten his first Bloodhound at 11 months old, Amos. Soon after the South Dakota Division of Criminal Investigation brought Amos and bloodhound program on-board. The K-9 Unit at its peak, under the supervision of Chad had four Bloodhound handlers and two air-scent handlers and a cadaver handler.  In 2002, Chad attended a T.A.S.K K-9 seminar in Texas, where he first met Kevin Kocher. This being one of his first seminars, he had gotten a taste of Kevin’s “passion” and ability to teach the art of running a hound. Kevin also provided him a paperback copy of “Read Any trailing and Tracking Dog”. At that seminar, Chad recalls, “I was sitting at a table listening to Kevin Kocher, Glenn Rim by, Jerry Yelk and Al Nelson talking “hounds” thinking there is over 100 years of experiences sitting in front of me, which I will never forget”. Over the years Chad has ran 100+ case trails to include homicides, robberies, burglaries, and stolen vehicles along with missing and abducted persons. Chad implemented an Abduction Prevention Class, where he and his hound traveled to schools talking about the importance of abduction prevention and how to protect yourself as a child in the unspeakable event, they become a victim. Chad was part of the CART (Child Abduction Response Team) and was the only K9-team certified in the State of South Dakota. Chad also had gotten the State of South Dakota to recognizes INBTI-Kocher Method as their certification standard for scent discriminatory man-trailing. Chad has received accolades for Mayors, Chiefs of Police, Sheriffs and the Office of the Attorney General, along with those accolades he has received the most important ones, are from the families of missing persons and thankful people of the community he served.

I have always lived by the mantra that, “the dog is smarter than the handler”, once I “trusted my dog” lived by method, trained and trained some more did the success as a K9 team come. It’s not enough to go out and “run your dog” our dogs react to us. If you don’t have intensity and you don’t train INTENSITIES your dog will not have intensity. Train for every scenario that you may have to deal with, use the components to make training successful. If your struggling with understanding your dog go back to the foundation, INTENSITIES. Always remember were learning what our dog is telling us, were not trying to tell the dog what to do. Scent discriminatory man-trailing is natural for a dog, were just along for the ride.